Arsenal owner Stan Kroenke’s humiliating climbdown over joining the European Super League appears to have only further estranged him from the club’s furious fans.

Around 2,000 protested prior to Arsenal’s Premier League match with Everton on Friday, registering once again their distaste for the American owner.

Chants of “We want our Arsenal back” and “We want Kroenke out” were mixed with expletive-ridden outbursts.

Signs depicted Kroenke as a vampire and devil whilst flares added an acrid smell to the tense atmosphere.

Jason McIntire, a builder, said it was time to restore the old emotions associated with the ‘Beautiful Game’.

“Money can’t buy passion. That’s why we’re all here today: to kick out the money-hungry and bring back the passion, the love, the energy.

As time passed on Friday, beer cans and bottles littered the ground and there was more chaos.

One fan with his face covered in blood was stretchered into an ambulance.

Police reinforcements arrived in two waves to jeers from the fans.

In all there were 27 police vans with a helicopter hovering overhead.

The fans came from all walks of life but they appeared to universally have one similar wish — farewell to the 73-year-old owner, who first bought a stake in the club in 2007.

Success has been thin on the ground for Arsenal in that time with just four FA Cups and they last played in the Champions League in the 2016/17 season.

Even their bigger signings have failed to spark great enthusiasm amongst the fans.

The slump in form of striker Pierre Emerick-Aubameyang this season after signing a lucrative new contract had echoes for them of the Mesut Ozil saga.

The now departed German World Cup winner sat idly on the sidelines despite being the biggest earner at the club.

“Kroenke hasn’t even invested one pound in this club and look how it’s gone: challenging for the Champions League to 10th in the Premier League,” he told AFP.

“He doesn’t talk. He doesn’t communicate with the fans. Fans are the heart of the club. How is that possible? We want our voices to be heard.

Both Kaoonje and Jo Tefter, 44, chief executive of a charity, are keen for fans to gain representation on the boards of clubs.

They will hope the fan-led review set up this week following the Super League fiasco, under the direction of former sports minister Tracey Crouch, will reach the same conclusion.

“I want the government to bring in new legislation so we can have fan ownership.

“We want to say loud and clear: we do not want Stan Kroenke near our football club.

Nicholas White, a 24-year-old waiter, said the Emirates was a joyless place even when fans were allowed in before the coronavirus pandemic.

“It’s time for greed to leave football,” he told AFP.

“There’s no place for a man like Stan Kroenke at this football club. He’s a disgrace.

“If you’re going to take out, put in. We’ve had nothing. Look at the stadium — there’s no colour or life here.

“We need to get him (Kroenke) out, back the boys and have honest football without money.”

To add to the fans’ dismay, Arsenal were beaten 1-0 by Everton. 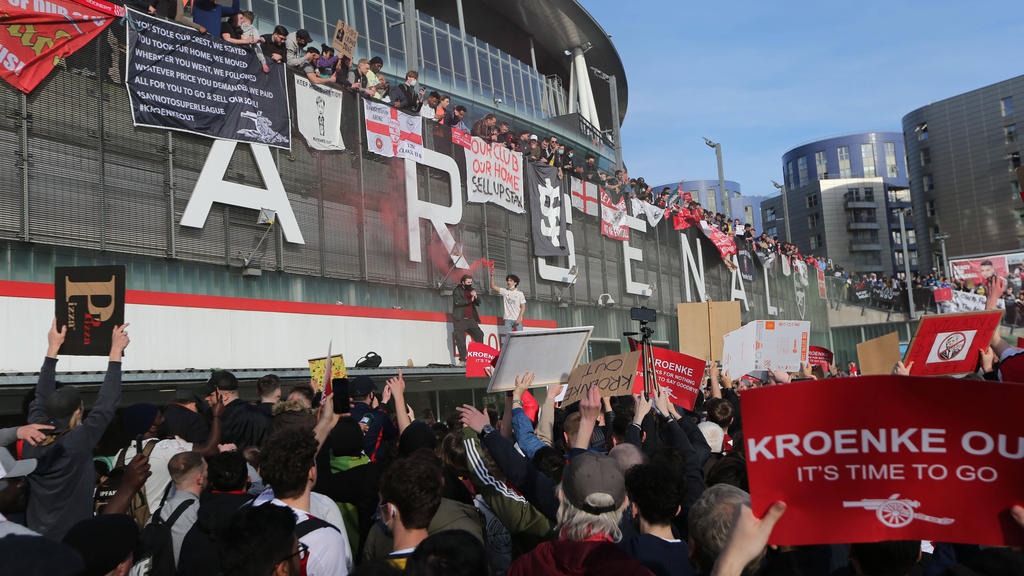